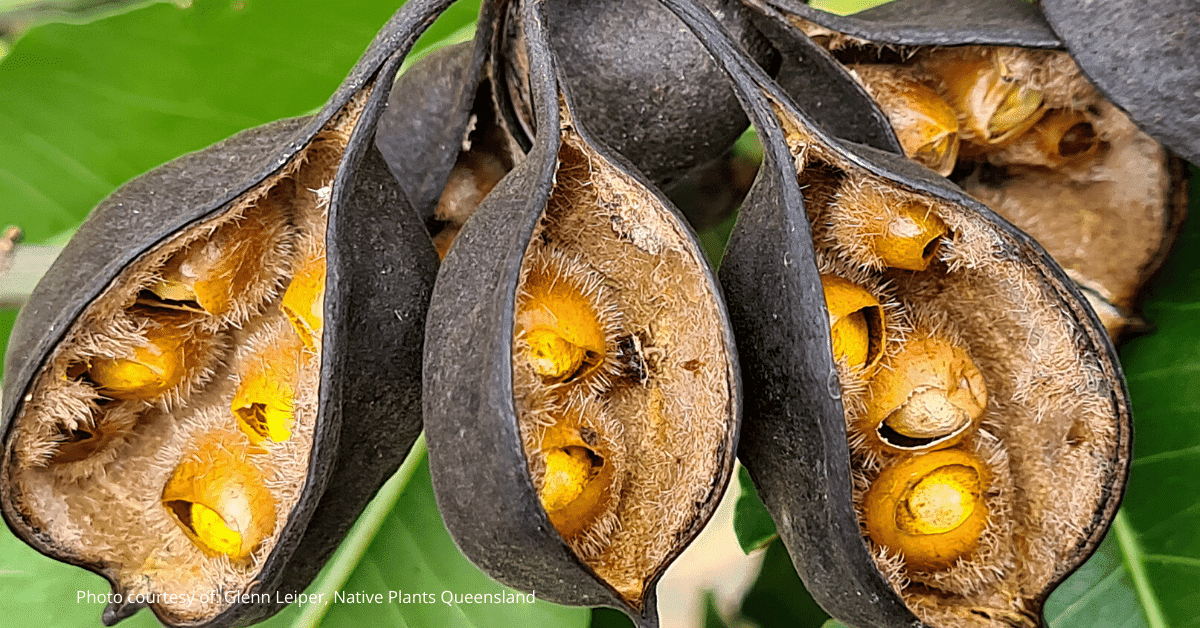 9
Thursday, 21 April 2022 / Published in Back from the Brink, Education, Resources

Ormeau Bottle-tree – Back from the Brink

A Tree with No Name! The Remarkable Story of One of the Gold Coast’s More Mysterious Native Plants

Natura Pacific’s latest episode in the Back from the Brink series, Season 4 Episode 4, tells the story of the Ormeau Bottle-tree (Brachychiton sp. Ormeau). This incredible tree is a cousin of the more familiar Queensland Bottle-tree (Brachychiton rupestris) and other bottle-trees such as the Kurrajong (B. populneus), Lacebark Tree (B. discolor) and Broad-leaved Bottle-tree (B. australis). It also appears not too dissimilar to the fascinating boab trees found throughout southern Africa, Madagascar and Western Australia. Indeed our native bottle-trees share the same genetic family group as the boabs; the Malvaceae family, and together they all bear varying degrees of plumpness around the waist! Without sounding too discouraging, these guys have a characteristic swollen midriff, which is a fantastic evolutionary trait developed for water storage! Both the boabs and bottle-trees generally live in arid and semi-arid environments and so, perfecting the art of water storage, certainly has its benefits in times of drought while surrounding plant species often die off due to dehydration.

Zooming into the Ormeau Valley on the Gold Coast in the 1980s, Janet Hauser, a local botanical illustrator and amateur botanist, discovers what looks like a young Bracychiton, or bottle-tree species, growing in wet sclerophyll forest near a popular route she often took with fellow nature enthusiasts. While observing the plant with fellow amateur botanist Glenn Leiper, a lightbulb suddenly came on in their heads. For all these years, their group of nature enthusiasts had been meeting under a lovely old “mango tree” a side the main road that leads up and down the valley and set them on their walking route. Could that very tree, a tree which always did seem a bit out-of-place to the group, in fact be a mature specimen of the young bottle-tree they were looking at at their feet? The group raced back to the main road, out of the forest, to the old tree they thought they knew so well, and lo and behold, upon closer inspection, it was a bottle-tree! 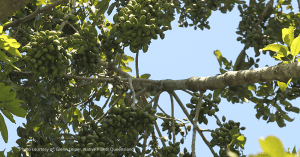 So what species was it… exactly? Well, a gentleman by the name of Lloyd Bird collected the first specimens of the tree with the group and sent them off to the Queensland Herbarium, where experienced botanist Dr Gordon Guymer pondered over it. After testing and comparing it with other bottle-tree specimens (Dr Guymer is the Queensland expert on these trees) it was decided by the experts, that what had just been found, not far from the urban center of the sprawling Gold Coast, was absolutely a brand new species to science! The trees were, over the succeeding years of ventures out to the valley to find them, found to grow to over 120 years old, up to 35m in height and over 1m in trunk diameter. That’s a big tree! They produced lovely velvety starfish-like male and female flowers and were pollinated by small insects. The fruit-pods bore hairy little yellow seeds which were likely dispersed by hungry birds (more on this later!).

In the decades that have followed its discovery, various researchers and non-government organizations have conducted important research on the Ormeau Bottle-tree, locating individuals in the wild, running genetic testing and developing a propagation technique for germinating the young plants in polytunnels and in botanic gardens. In the early 2000s, a summary of work-to-date concluded that only 160 mature plants were left in the wild, and so the plant soon after became protected by law under the Australian Government’s Environment Protection and Biodiversity Conservation Act 1999. With such a small population and multiple threats looming on the last individual trees, protecting it under the Act as a Critically Endangered species was an important turning point in the species’ history. From here, researchers wanted to learn more about its ecology so they could help reintroduce it into the wild and boost its population. In particular, they investigated why on earth the plant was often found in wet sclerophyll and rainforest ecosystems in the Ormeau Valley, while its cousins loved living it tough out in more arid regions? More on this later!

This all led to an exciting survey conducted in 2019 by Healthy Land and Water. Paul Donatiu and his survey team discovered two amazing advances in the bottle-tree’s story. One, that the tree was doing better than originally thought during the 1990s and 2000s, with over 500 juvenile trees now being found during the latest survey, which added to the 160 adult trees known to exist prior. And two, that the young trees were not recruiting in the cool, dark rainforest that the adult trees were surrounded by, but were in fact growing underneath large perch-trees such as Brush Boxes (Lophostemon confertus), in much dryer, open forests.

After deliberating over the causes of this successional pattern, the team at Healthy Land and Water concluded after their surveys that the tree might indeed be a pioneer species. Pioneer species are sort of ecosystem engineers in nature. They are the species that help transform one ecosystem into another. For example, many Acacia species (wattles) that, if sown in open grassland, will quickly transform that grassland into a scrubland. In the case of the bottle-trees in the Ormeau Valley, it seems that, due to their ability to store water in their trunks and survive droughts, the young trees can establish in areas of often poor soil with low moisture where many other plants can’t. The perch-trees that the plants often grew under were likely areas where seed-eating birds could easily rest and defecate in the open canopy, deposited seeds into the nearby soil at the perch-tree base. The young trees then get a foothold here and over time grow and swell in size, eventually becoming a large dense tree with a thick glossy green canopy creating a cooler and moister micro-climate. As other plants that no longer tolerate increasing shade and moisture die off, and new ones that can colonise around these growing trees survive, they contribute to the build-up of organic matter in the soil. After centuries of multiple bottle-trees being deposited from perch-trees into these dry forests and performing these ecosystem engineering “acts”, the overall environment can begin to change from a drier forest to a wetter forest and thus eventually creates an ecotonal rainforest dotted with big, fat bottle-trees with their heads way up in the canopy! Some other rainforest trees such as the Celerywood (Polyscias elegans) also function in much the same way; bringing the rainforest with them as they establish and grow!

While studies like this go to show the amazing adaptations of this tree, still so little is truly known about it. So little in fact that it still doesn’t have a formal name! It’s scientific name still only refers to the type-location where the original plants were found by Janet Hauser and her friends, all those years ago – Brachychiton sp. Ormeau. One of the reasons why this process has been slowed is the lack of genetic understanding of the plant’s evolutionary history. This work remains to be completed by the experts at the Queensland Herbarium and other local academics. But in the meantime, it is certainly a tree to be celebrated and is already much-loved by local Gold Coasters in the Ormeau region. From Boral who own quarries in the Upper Ormeau Valley and has helped to safeguard some of the biggest adult trees left and their offspring to the North East Albert Landcare group headed up by Sue and Bob Durance of Kingsholme, the local community is passionate about saving their tree with no name!

If you’re keen to find out more about the Ormeau Bottle-tree, its amazing story, and what you can do to help support its habitat and its survival into the future, check out Season 4 Episode 4 of Back from the Brink being released on 30th April 2022 and available online for free through Facebook, YouTube, Instagram and more. For quick links to the film and the accompanying podcast, click on the URLs below:
Films – https://bit.ly/3gJf1VC
Podcasts – https://apple.co/3nhCb5P 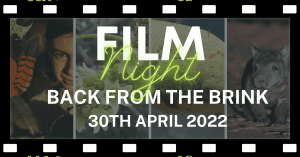 Keen to meet some of the crew in person? Why not come along to our Ormeau Bottle-tree film release night (along with three other features films) on the  30th April at 4:30om at the Robina Community Centre Auditorium, Robina. Tickets are free and available online at: https://www.eventbrite.com.au/e/naturallygc-back-from-the-brink-film-screening-tickets-158533510999.

Keen to grow an Ormeau Bottle-tree? Keen to know how you can get involved in restoring the precious bottle-tree habitat in the Ormeau Valley? Get in touch with North East Albert Landcare at: s.durance@bigpond.com. 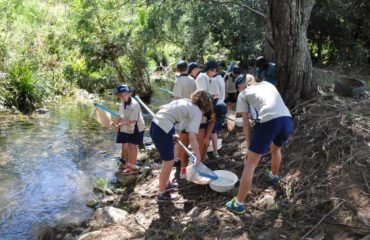 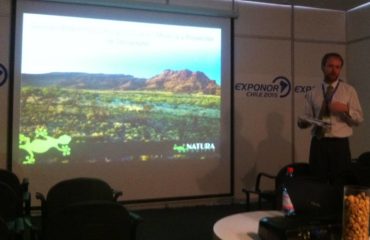 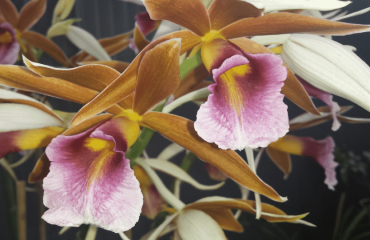 Swamp Orchid – Back from the Brink